Getting Around Japan > Destination > KYOTO

Kyoto is the second most visited city in Japan, and has a myriad of attractions. As the cultural capital of Japan, with over 2,000 temples and shrines. Over 20% of the National Treasures in Japan are located in the relatively small city. Besides the cultural treasures, Kyoto is renowned for its pronounced seasons, with lovely cherry blossoms blooming all over town in early spring, and brightly colored leaves in autumn.

Kyoto’s Higashiyama district is the area at the edge on the eastern mountains surrounding the city. Renowned for its beautiful, historic lanes, shrines and temples. The district is vast so generally divided up into the Southern and Northern districts.

Gion is known as the geisha district of Kyoto, with two hanamachi, or geiko districts. The traditional style of the buildings reminds of centuries past. Besides a multitude of tea houses frequented by kimono-clad geisha, the area has a range of excellent restaurants and cafes. 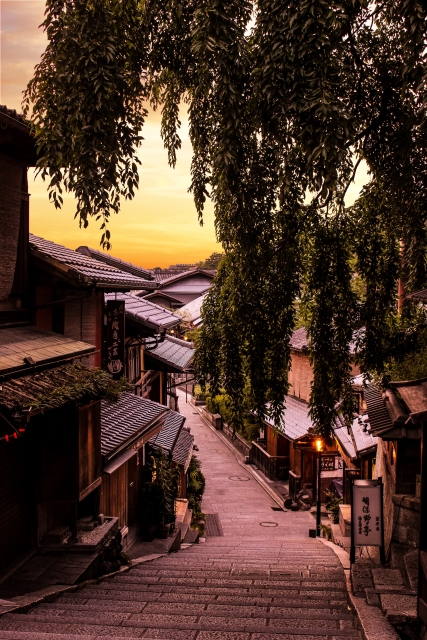 If you are keen to see geisha, just wander the narrow lanes of Gion in the evening. Chances are you’ll hear the wooden shoes of the geisha clicking and see them whizzing in and out of tea houses where they’ll entertain customers by dancing, singing, and providing pleasant company. 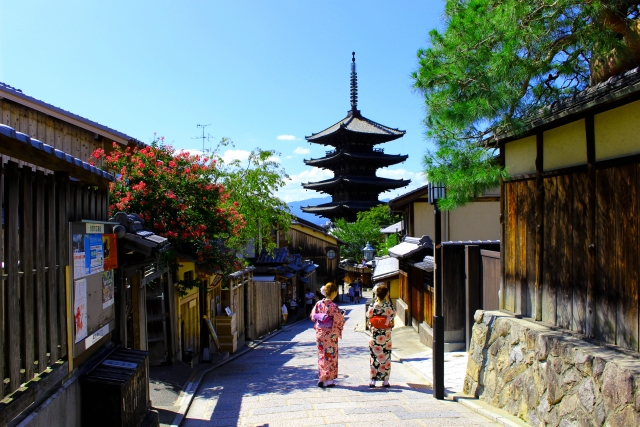 One of the major landmarks in Gion is the Yasaka Shrine, a 7th century shrine also known as the Gion Shrine. It is one of the most popular shrines in Kyoto, and especially visited around New Year’s. The shrine is the start and organizer of the the Gion Festival, one of the Three Great Festivals in Japan. 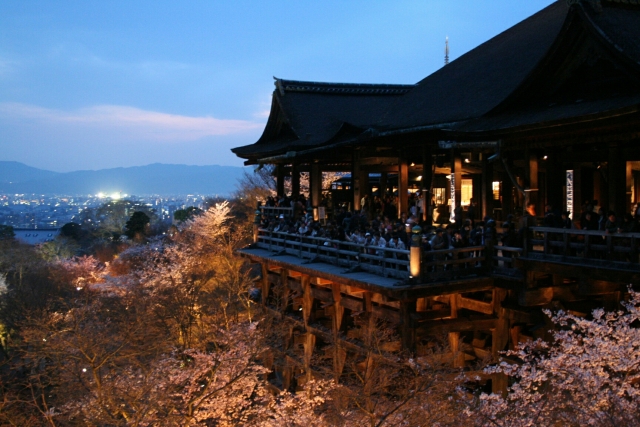 From Gion, Kiyomizu-dera (清水寺, 6:00-18:00, 400), the most famous temple in Kyoto (under contention), is a 20-minute walk away. Perched on the top of the southern hills of Kyoto, an uphill walk of 10 minutes along the Ninen and Sannen lanes leads to the temple. These lanes are filled with craft and souvenir shops and atmospheric eateries. Once at the temple, one of the best views over the city can be seen. The temple is an unusual structure, with a maze of beams keeping the building to the side of the mountain. 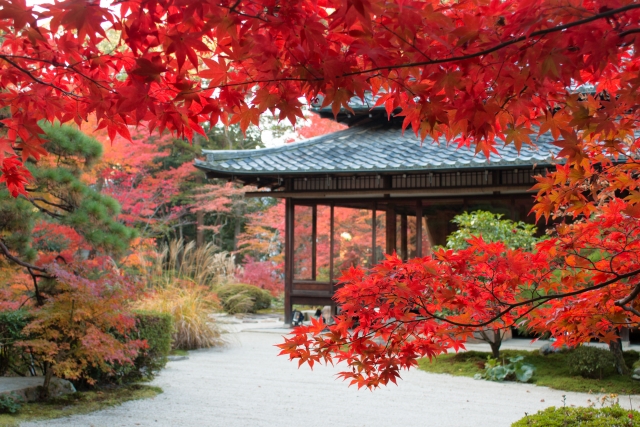 Stay at the edge of the Higashiyama mountains and you’ll arrive to the Nanzen-ji Temple (南禅寺, 8:50-17:00, ¥500). This large zen temple complex has various subtemples, all with their own sights to see. Hojo, the main hall and a National Treasure, especially is worth for its rock garden. This garden is said to paint a picture of tigers crossing through water. 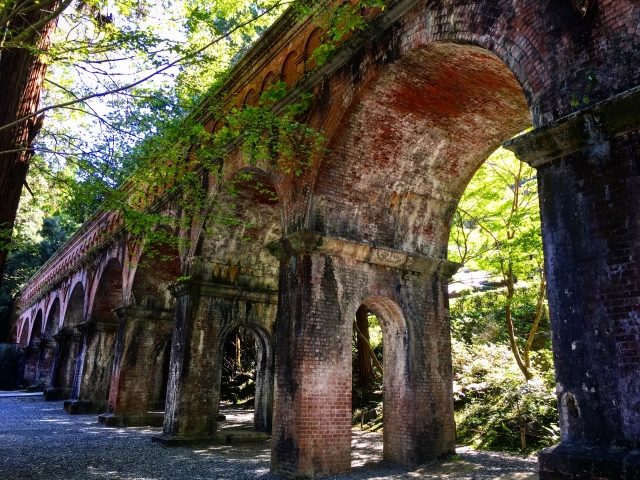 Adjacent to the Hojo Temple is a very un-Japanese looking structure. The aqueduct was built in the Meiji Period (1868-1912) for transporting goods from Lake Biwa to the city of Kyoto. The aqueduct has become one of the most popular places for photo-shoots. 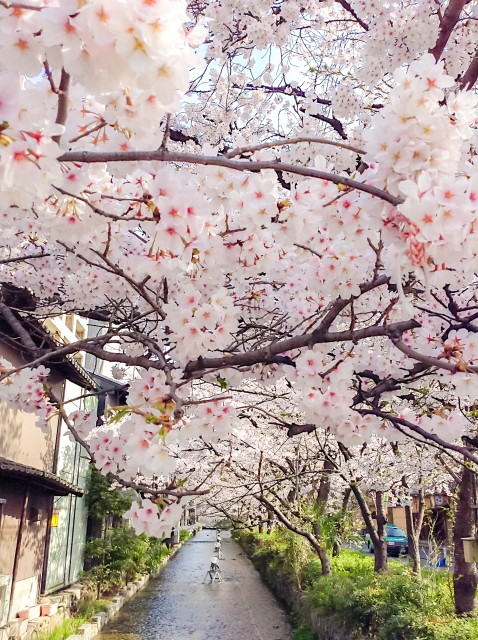 From the Nanzen-ji Temple, you can walk along the Philosopher’s Path to the Silver Pavilion, like Kitaro Nishida, one of the great minds in Japan. It is said he walked the 2 km path daily, meditating while he went along. The Philosopher’s Path is a lovely walk any time of year, but especially early spring is enchanting. The walk goes alongside a small stream, framed by cherry blossom trees, which bloom brightly around the end of March. 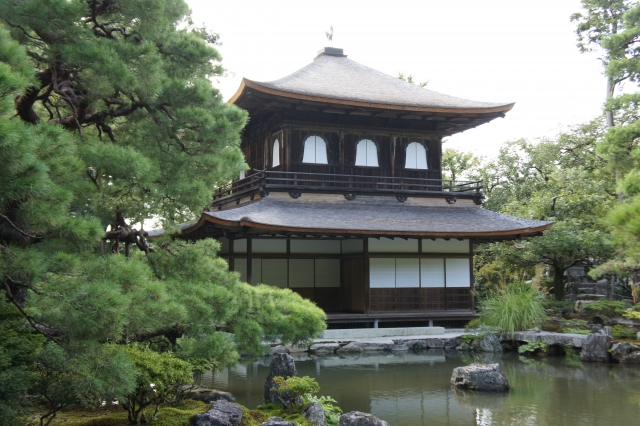 After a 2 km walk past small restaurants, shops, temples, and shrines you’ll arrive to the Silver Pavilion (銀閣寺,  8:30-17:00, ¥500). The Silver Pavilion is the antithesis to the over-the-top, obviously important Golden Pavilion. The Ginkaku-ji temple is modeled after the golden Kinkaku-ji but almost understated, with the Silver Pavilion a small, brown temple at the side of a lake. The gardens around the temple are beautiful and tranquil, with moss and sand gardens. 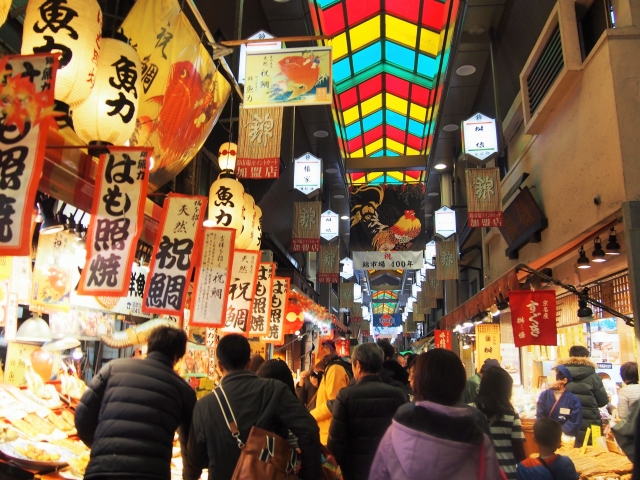 In downtown Kyoto, near the modern, glitzy shopping streets with massive department stores, is the 400-year-old Nishiki Market (9:00-18:00). This roof-covered market hall is 400m long, and has a multitude of stalls with things like streetfood, knives, vegetables, pickles, fish, and more. Every 10 seconds you get hit by a different smell. 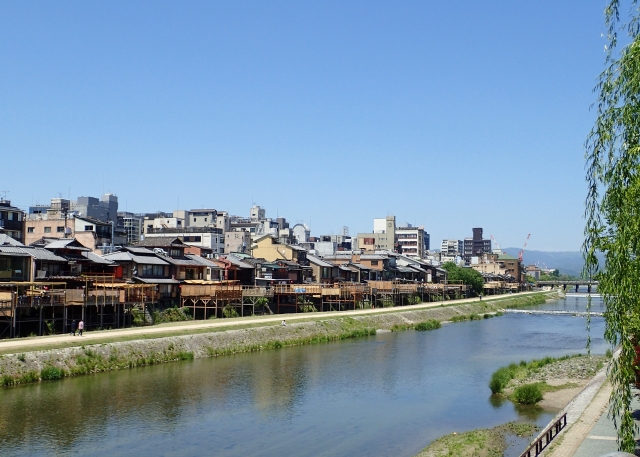 A 5-minute walk from the Nishiki Market is the geisha district Ponto-cho (先斗町), running parallel to the central Kamo River. This is Kyoto’s second geisha district, after Gion. Besides tea houses, the narrow lane has many eating establishments, with all types of food and of all price ranges. 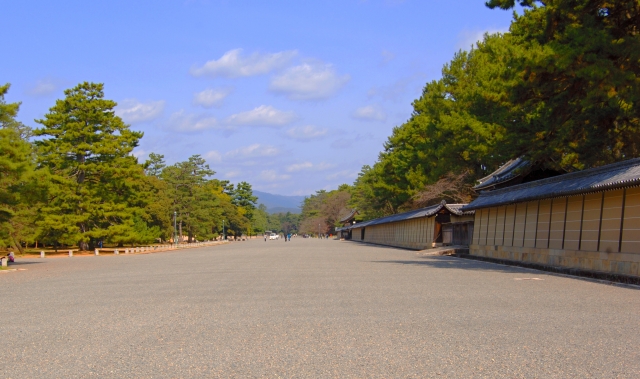 Walk along the river for 20 minutes and you’ll see the Imperial Park, a large, green area, looming on the left. In the center is the enclosed Kyoto Imperial Place (京都御所, 9:00-17:00), the former main residence by the Imperial Palace whose grounds can now be explored freely by visitors. The holiday home of the Imperial family is the adjacent Sento Imperial Palace (仙洞御所, 8:40-17:00), a palace with a lovely garden. You can only stroll through the garden via an official Imperial Household Agency tour, with the whole tour conducted in Japanese. 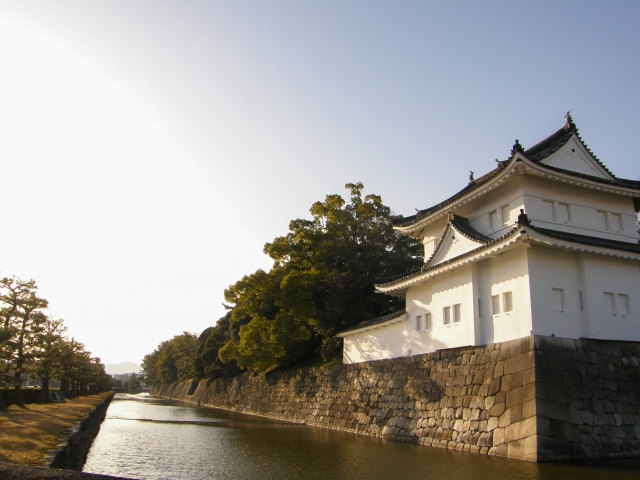 The Nijo-jo Castle (二条城, 8:45-16:10, ¥600) is a central castle laid out over an expansive area, and is a UNESCO World Heritage Site. The walled castle was built in Japan’s feudal era (1600-1868) for the first shogun and unifier of Japan, Ieyasu Tokugawa. Nowadays, the castle with two sections and traditional gardens.

The downtown area of Kyoto has much more to offer, with many temples, shrines, the Kyoto Station, Kyoto TV Tower, and museums such as the International Manga Museum (10:00-18:00, ¥800). 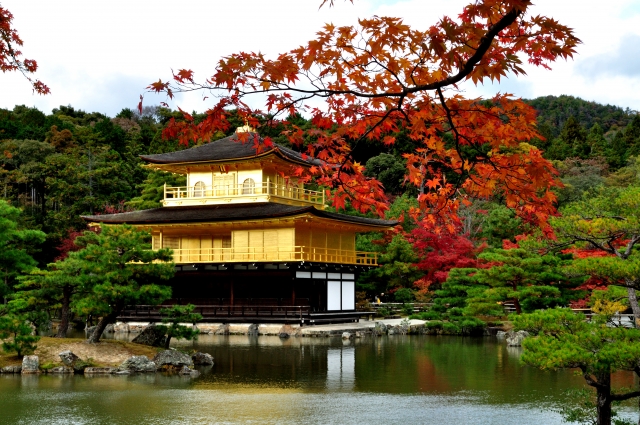 The ostentatious Kinkaku-ji Golden Pavilion (金閣寺, 9:00-17:00, ¥400) is one of Japan’s most famous temples, and is a must-visit when visiting Kyoto (as long as you do not mind crowds). The history of the Pavilion dates back to the 14th century, but due to fires, the building you can see today was made in 1955. What makes the temple a sight so see, is that it is covered with gold leaf, making for a completely gilded building. 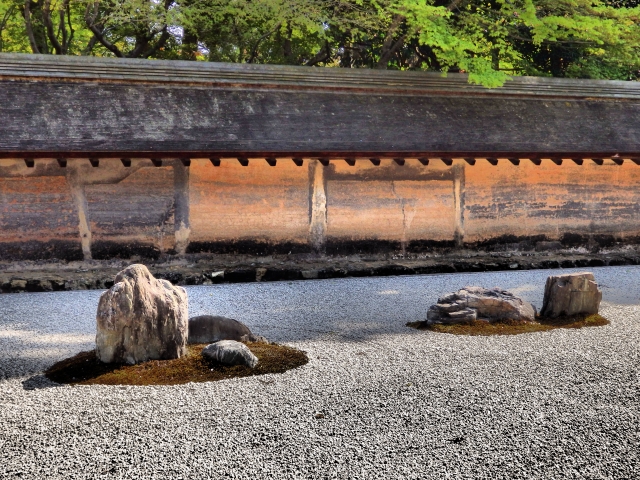 A 20-minute walk from the Kinkaku-ji, the zen temple Ryoan-ji (8:00-27:00, ¥500) with its gorgeous gardens is located. There is a water garden with a large pond surrounded by cherry blossom trees, a tea garden with tea house, but the star of the temple is the rock garden, meticulously broomed and groomed in patterns said to stimulate a zen state. A restaurant looking out over a traditional garden in the temple serves boiled tofu – a specialty in Kyoto. 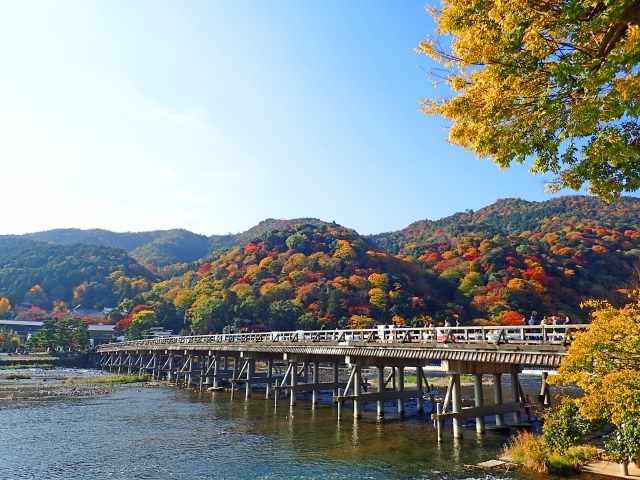 The Arashiyama area is a little out of center, but is the second most visited place in Kyoto. At the heart of Arashiyama runs the Kamo River, with the Togetsukyo Bridge connecting the both shores.The streets here are mostly touristy, with many souvenir shops, restaurants, and cafes. The main sights to see are a little further from the Arashiyama center. 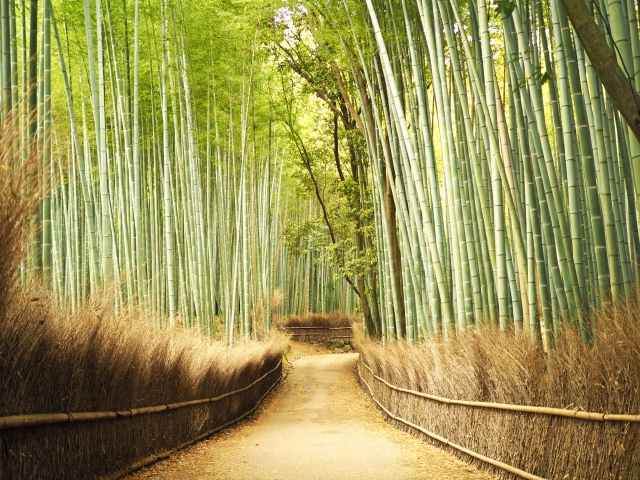 Arashiyama’s major attraction is the Arashiyama Bamboo Grove. Like the name suggests, the grove is filled with massive bamboo. Walk along the main street for just a few minutes, turn left, and suddenly you’ll be surrounded by tall, green stalks. 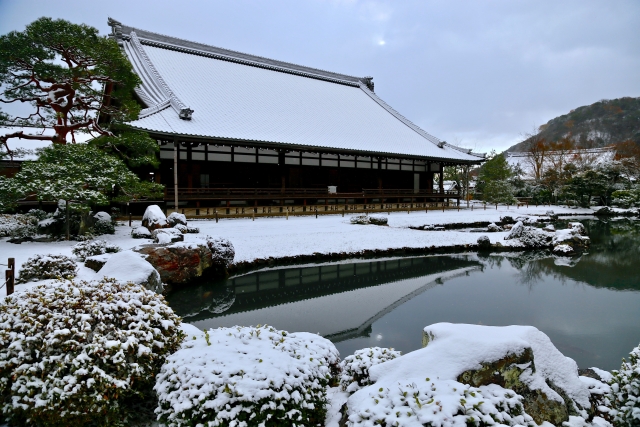 The Tenryuji Temple (8:30-17:30, ¥500) can be accessed from the Bamboo Grove. This temple is one of the 5 Great Zen temples in Kyoto, and known for its beautiful garden. Stroll around it and end at the temple restaurant, where you can have a traditional Buddhist meal. 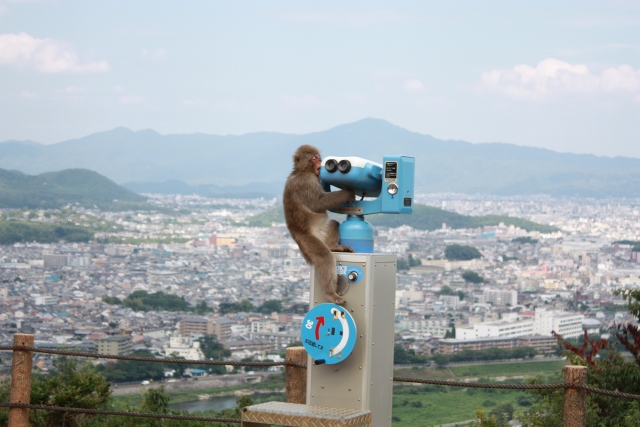 On the other side of the river are more shops, but more importantly, there is the Monkey Park Iwatayama (9:00-17:00, ¥550). The park is on top of a hill and is inhabited by Japanese Macaques. Interestingly enough, humans get put in a cage and from there you can feed the monkeys. It is one of the places to be at to see the city from.

Southern Kyoto is where one of Kyoto’s most significant landmarks is located, a shrine dedicated to Inari, the Shintoist god of rice. 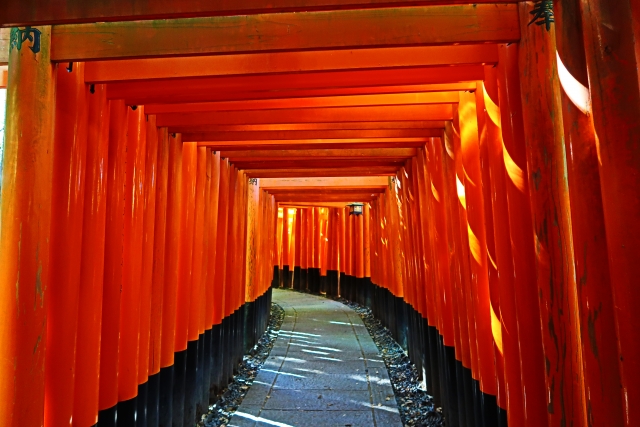 The Fushimi Inari Shrine (伏見稲荷大社) is some ways from the center of the city, at the base of a 233m tall mountain named Inari. From the main Inari Shrine, a long line of red torii gates circle upwards to the top of the mountain, past several smaller shrines. Torii gate after torii gate, gifted to the shrine by Japanese businesses, line up for a 4km walk for 2 hours. The tunnel effect created by the gates is stunning, and has long been one of the most photographed scenes in Japan. The gates are open all day all night.

How to get to Kyoto