KANAZAWACity known for its geisha and samurai districts, castle, and most famously, its garden.

Getting Around Japan > Destination > KANAZAWA

Kanazawa is a lesser known gem. A visit to the capital city of Ishikawa Prefecture is well worth it as the city has good food, beautiful gardens, historic buildings, and a lovely atmosphere. Many Kanazawa buildings built during the Edo Period (1600-1868) have stood the test of time. Nowadays people can get a taste of the Japan of centuries past by walking around the well-preserved geisha and samurai districts, the castle, and most famously, the Japanese garden. 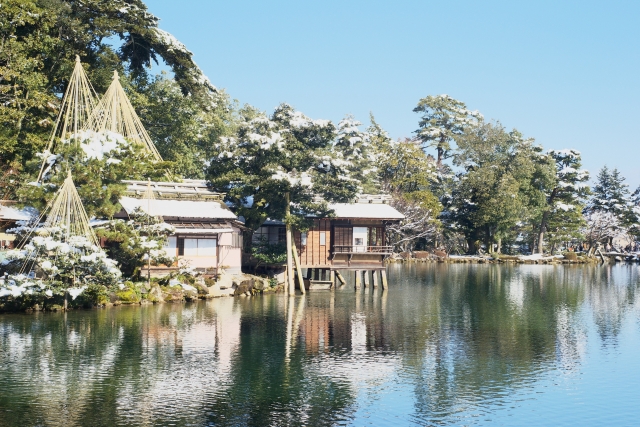 Kenroku-en is the main attraction of Kanazawa. Known as one of the three most beautiful gardens in Japan, Kenroku-en attracts visitors at any time of the year. Originally laid out by the Maeda samurai clan, Kenroku-en opened to the public in the late 1800’s. Since then, the garden has been much-beloved and admired by many of the Japanese. 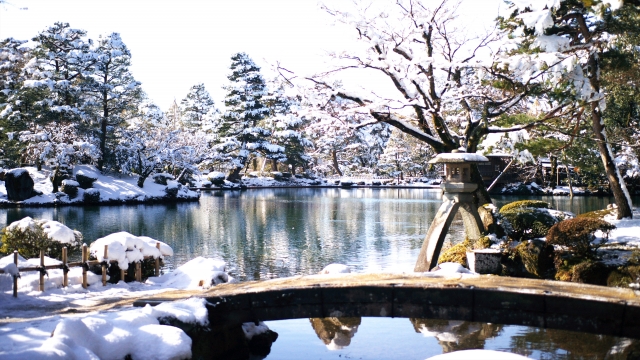 The landscape garden is big, with a wide range of flowers and trees. Most famous is the Kotojitoro Lantern, which stands in the Kasumiga Pond, the most central point of the garden. The garden has a set of tea houses, and just outside the entrance gate is an attractive street with souvenir shops and eateries. Any time of the year is a good time to visit, with the plum and cherry blossoms creating a colorful pallet in spring, in autumn many of the maples turn red, orange, and yellow, and in winter white snow blankets much of the garden. 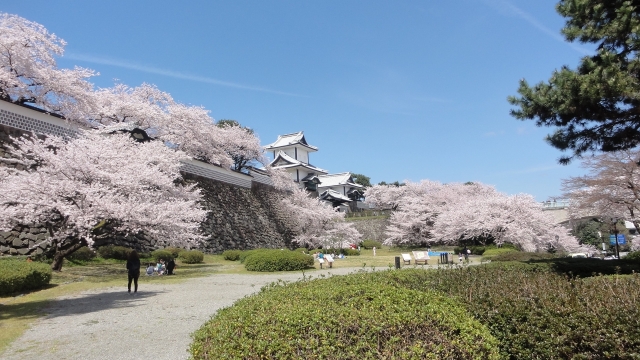 If you exit Kenroku-en via the Katsurazaka Gate, you’ll see a bridge which will lead you to Kanazawa Castle and its surrounding park in less than 1 minute. Kanazawa Castle was the home of the Maeda Clan, a clan of powerful samurai lords which ruled the region until the end of the Edo Period. Much of the castle of Kanazawa is relatively recently build (and still under construction) as it burnt down a couple of times. 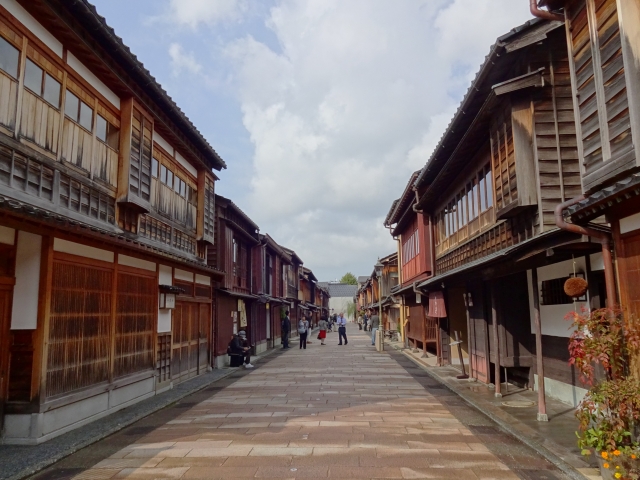 Next to the river is Higashi Chaya, a well-preserved geisha district where geisha’s used to entertain their customers with singing and dancing at the chaya or tea houses.Two of the tea houses are open to the public. At the Shima or Kaikoro Tea House you can see how geisha lived and where they entertained. Many of the other chaya’s have been made into shops or cafes. One of the most interesting shops is the Hakuza Gold Leaf. This shop sells all sorts of Kanazawa gold leaf items, and has a tea house completely covered in gold leaf which can be seen from the shop. 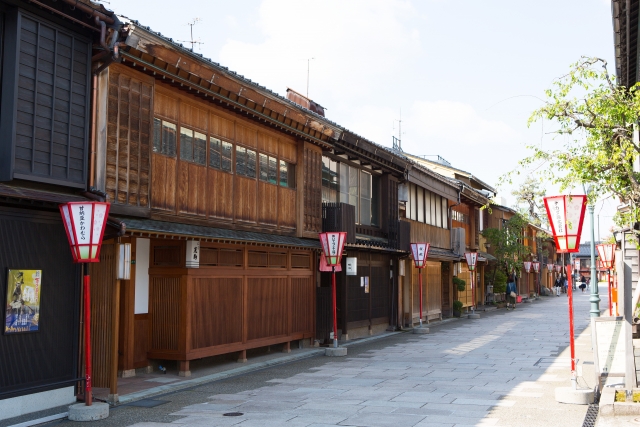 Higashi Chaya is not the only geisha district but it is the largest and has the most attractions. There is also Kazuemachi just across the river from Higashi Chaya, or Nishi Chaya as pictured above. Nishi Chaya is the western district. Many of the houses are closed to the public but the Nishi Chaya Shiryokan museum gives you an idea of what the area was like when all the houses were used for entertainment.

The Myoryuji Temple, also nicknamed the Ninja Temple, is only a 3-minute walk from Nishi Chaya. The temple is in the aptly named temple district called Teramachi, and is probably the most interesting temple there. There were no ninja monks in the temple, but soldiers from the Maeda clan used the temple as a military look-out. If any invaders approached the city, the Myoryuji Temple, conveniently located in the outskirts, would be among the first places to see the approaching enemy. The whole temple is designed with escape routes, secret rooms, hidden staircases. You can discover the temple’s hidden secrets on a tour operated in only Japanese. English guidebooks are available and reservations recommended. 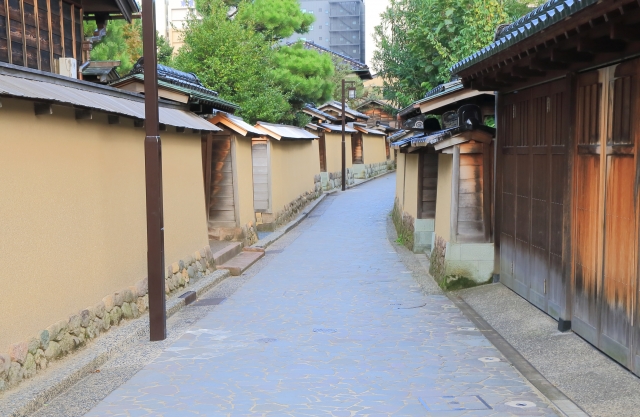 The Nagamachi district was where samurai and their families used to live. Called the Samurai District, the houses with its clay walls and solid structure show a whole different type of architecture compared to the geisha districts. The district has the Nomura House, a restored samurai residence with a lovely garden, a museum by the name of Maeda Tosanokami-ke Shiryokan where you can learn of the Maeda Clan, and many more buildings which will tell you of the way samurai lived.

The 21st Century Museum of Contemporary Art is the most popular museum in Kanazawa and one of the best museums in Japan for contemporary art. Wildly modern compared to Kanazawa’s historic buildings, the museum does temporary and permanent exhibitions from Japanese and international artists. One of the most renowned artworks is the Swimming Pool by Leandro Erlich.

Other museums in Kanazawa include the D.T. Suzuki Museum, a museum dedicated to the Zen teachings of Suzuki as seen above. The Noh Museum, where you can learn about the Noh performance, and the Yasue Gold Leaf Museum which will teach you all you need to know about Kanazawa’s famous gold leaf are two other popular places to visit. 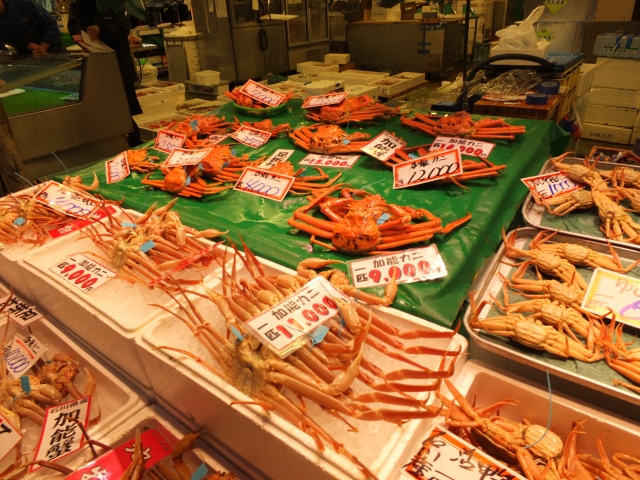 The Omicho Market is Kanazawa’s largest fresh food market and heaven for seafood lovers. The covered market sells items such as fresh fruits and veggies, flowers, and most importantly, seafood. Located close to the Japan Sea, Kanazawa has some of Japan’s best seafood which is proudly displayed at many of the stalls at Omicho. If you want to try some of the food, there are many restaurants in the market which serve freshly caught fish dishes. 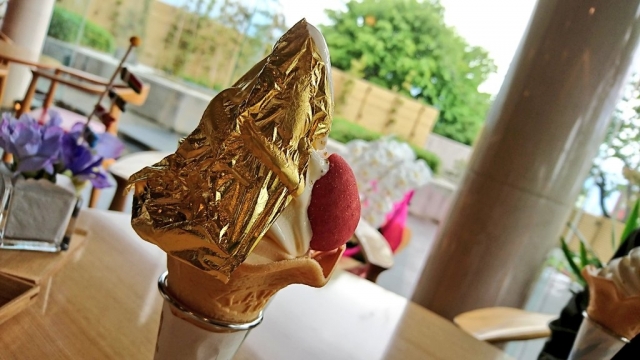 After having tried some of Kanazawa’s popular seafood, get familiar with the flavor of gold leaf. Kanazawa is known as gold leaf city, and many foods are decorated with it, like the above soft serve.

Tours to and from Kanazawa 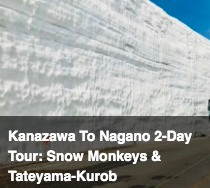 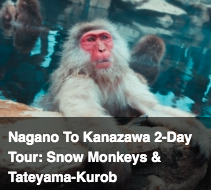 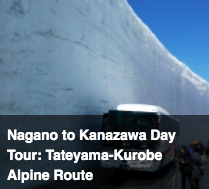 How to get to Kanazawa